This should prompt the cursor to reappear. 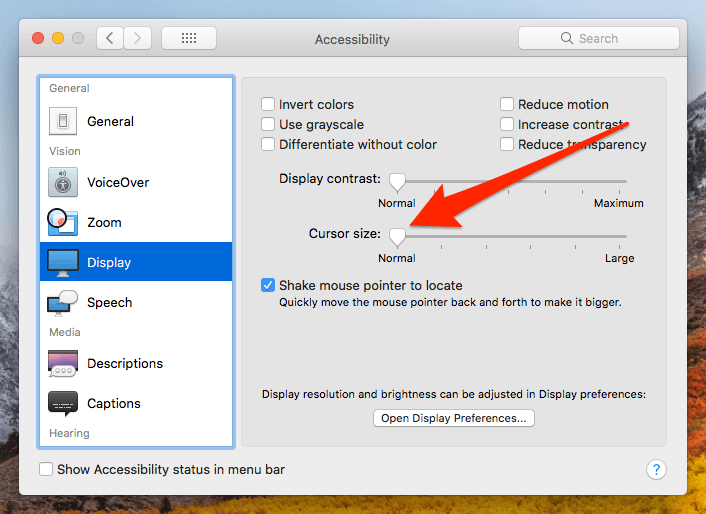 Click Display in the sidebar. I'm having the same problem. That's super annoying and ruin the whole process. If someone finds a workaround, please share.

This sadly breaks the screenshot cursor. This also causes the pointer movement to slow down when the cursor has to change rapidly, for example when moving across a paragraph of text vertically. But hey, at least the cursor isn't invisible.

Thank you very much liekki , even small increase of cursor makes the job. At least can continue to work. Hope it gets fixed very soon! Thanks liekki Just to add, I found that you can get the screenshot cursor back if you increase the cursor further. See screenshot.


After struggling with this for a few hours, nice I am not alone. Filled in a bug with apple Thank you for the tip.

I confirm, issues on monitor plugged using HDMI. Works fine on MacBook Pro Display. When SublimeText bg is lighter, the cursor shows up. The same issue occurs with ITerm. For iTerm I also found that there's a settings on advanced that's called "User system cursors" or something that actually makes it work too. Also fixed by slightly increasing the cursor, as zurnet said above - unnoticeable difference on screen but no longer disappears. Thanks guys! Still a problem on Build I feel like it could be a Mac OSX issue?

How to fix a disappearing cursor in High Sierra - macOS Guides

Confirming this is an issue for me in macOS Filed a bug with Apple as so many others have. Very disappointing to see no response or prompt action from Apple's team. Seems fixed to me on I have the issue at work but not at home. Using I think it has something to do with the refresh rate. USB-C device might not provide enough resolution. Forgot the screen I use at home might be a LG.

I don't have an issue with Iterm at work though.

How to fix a disappearing cursor in High Sierra

Dismiss Join GitHub today GitHub is home to over 31 million developers working together to host and review code, manage projects, and build software together. Sign up. New issue.